Yeison Riascos studied Plastic Arts at the University of Cauca and he now lives and works with local communities in Buenaventura. Working with a diversity of artistic practices, he has dedicated a large part of his life to making present in all of his works the traditions, memories and culture of the Colombian Pacific region. 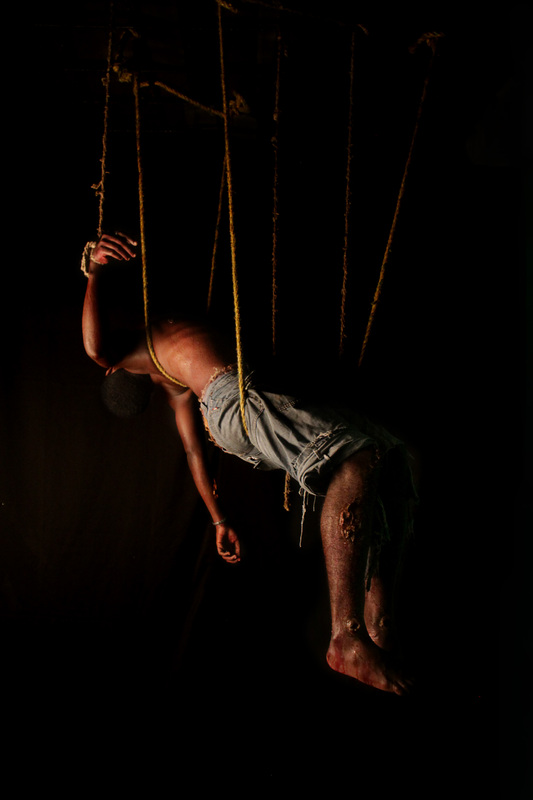 The photographic series "Descendimientos” (Descendings) is laden with feelings of pain and anger. It was conceived as a work of "protest", the preservation of memory and healing through expression. The work represents the descent of the body of Christ, the messiah in the Christian faith, from the cross of Calvary. The young men who posed for the photograph and the artist Yeison Riascos asked themselves what impact would it have if Jesus Christ were a young Black man from the Pacific coast of Colombia?

The highly dramatic photographic series, influenced by the aesthetics of the controversial Italian painter Merisi da Caravaggio (1593-1610), the father of tenebrism, refers to an act of violence that shook the neighbourhood of Punta del Este, in the city of Buenaventura, in 2012: the murder of 12 Black youths between the ages of 13 and 17 by the criminal organization, the United Self-Defence Forces of Colombia (AUC).

“Descendimientos” proposes a re-reading and appropriation of baroque aesthetic codes, with scenes representative of the Catholic faith, to extend reflections on racism, violence and the Black population in Colombia. The scene of the body of Christ being brought down from the cross by means of thick ropes, is represented in parallel with the body of the twelve adolescents who, after their disappearance on April 19, 2012, were found two days later dead and with signs of torture. The episode caused deep consternation in the Afro-Colombian community of Buenaventura and, to date, total impunity continues to reign. Riascos asserts that one of the intentions of the series was, by means of commemoration, to "heal the community wound" left by the incident.

Through his photographic work, Yeison Riascos portrays the daily life of the Colombian Pacific communities, which are strongly influenced by Catholicism. He proposes a visual reflection on Black bodies and the racialization of the violence that disproportionately affects Afro-Colombian communities in rural and urban areas of the country.