This book is the product of the work that the Identidad Marrón (IM) collective has been carrying out since 2019 through workshops, cultural institutions, journalistic articles and conversations. In these interventions, we reflect on three main axes: a) the erasure of Marrón (brown) cultural products due to racial and class-based exclusions, b) the practices of representation of Marrón bodies, which are often mediated by white perspectives, c) self-representation as an anti-racist alternative and to produce new forms of Marrón and dissident beauty.

America Canela, one of the authors, shows her book against her skin as a commentary over the cover design by Abril Carissimo.

The work gained specific intensity in the year 2020, in which discussions about racism in Argentina reemerged, a debate that draws on the historical struggles of the Afro and indigenous communities and goes beyond the policies of identity recognition.

This book is also the outcome of the cooperation established between IM and the research project Cultures of Anti-Racism in Latin America (CARLA), coordinated by the University of Manchester in collaboration with the National University of San Martín (UNSAM) and the University of Buenos Aires (UBA).

The book is a collective production, compiled and edited by Florencia Alvarado, América Canela and Alejandro Mamani, with editorial support from Pablo Cossio and Ana Vivaldi. The book is simultaneously memories of activism and militancy associated with territories and vectors that connect. 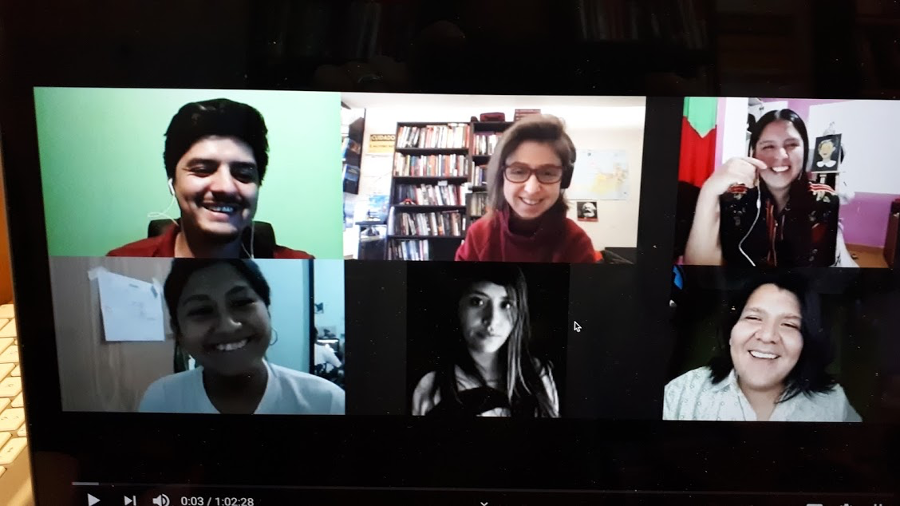 This book is also an object which combines texts with illustrations, collages, and memes. It includes photos from the collective's archive, which is under construction, and images aimed for anti-racist critique and construction. The images here are part of a deliberate curatorial work by América Canela and Flora Alvarado. This book object was designed by Neko Leguizamón, an artist, teacher and researcher who is part of the collective. The book is fundamentally a tool with activities and an invitation to take over cultural institutions and more.

Selection and compilation by Pablo Cossio and Ana Vivaldi 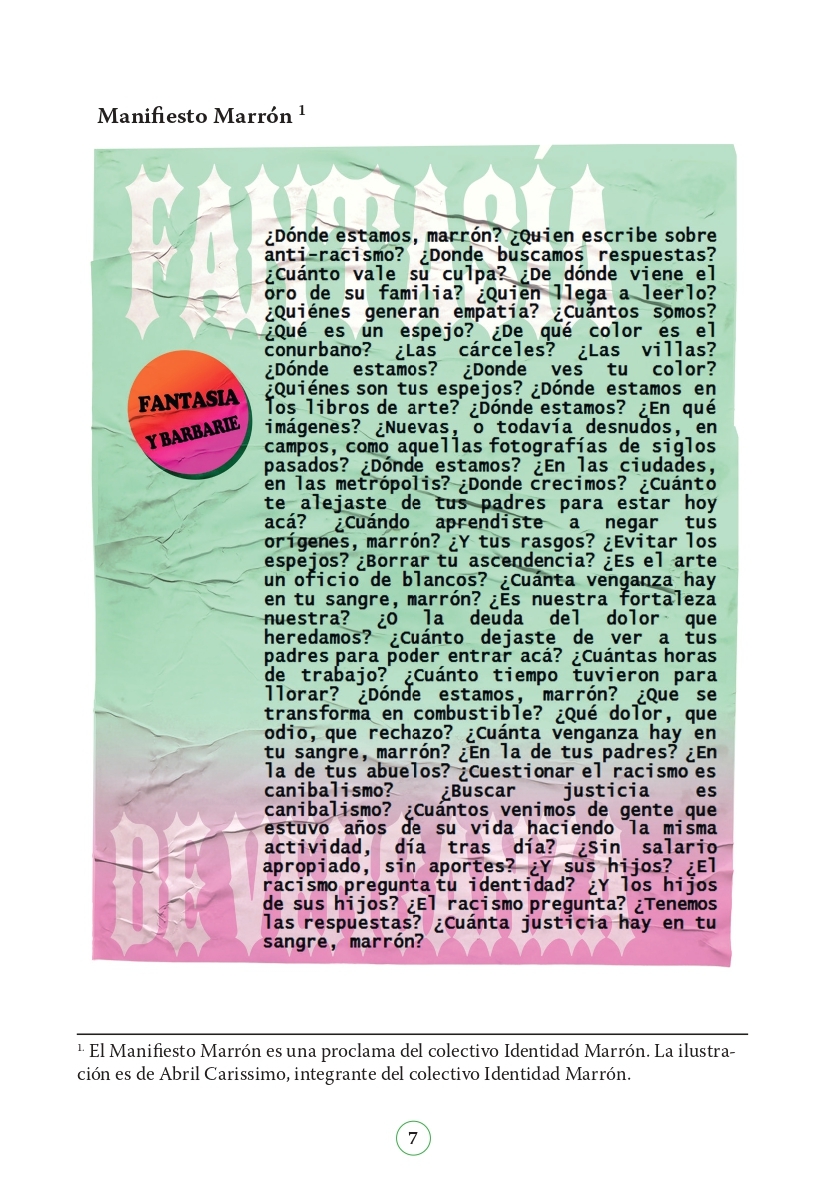 'Where are we, the Marrones? Who writes about anti-racism? Where do we look for answers? How much is their guilt worth? Where does your family's gold come from? Who gets to read it? Who generates empathy? How many are we? What is a mirror? What colour is the Buenos Aires conurbation? And the prisons? And the shantytowns? Where are we? Where do you see your colour?” (Page 7) 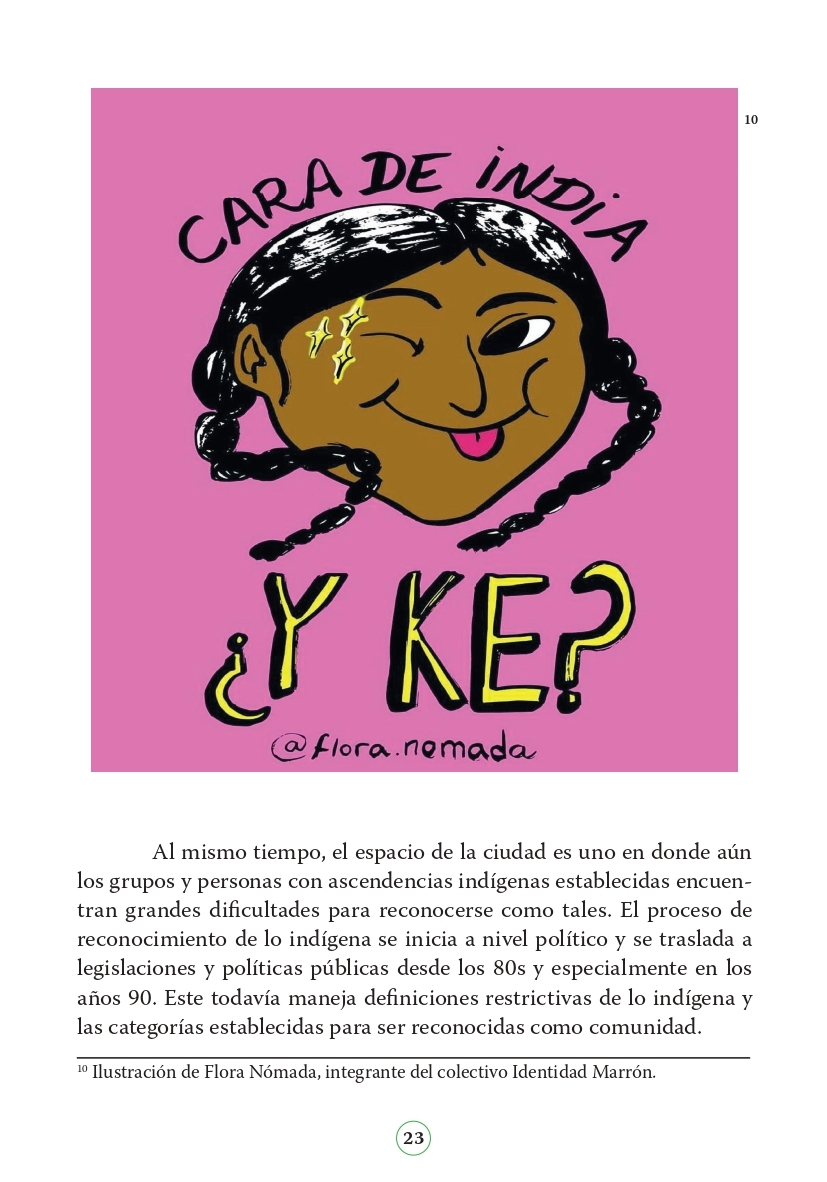 "Colourism becomes effective when, for example, social mobility and class are associated with European skin tones and phenotypes" (page 29) 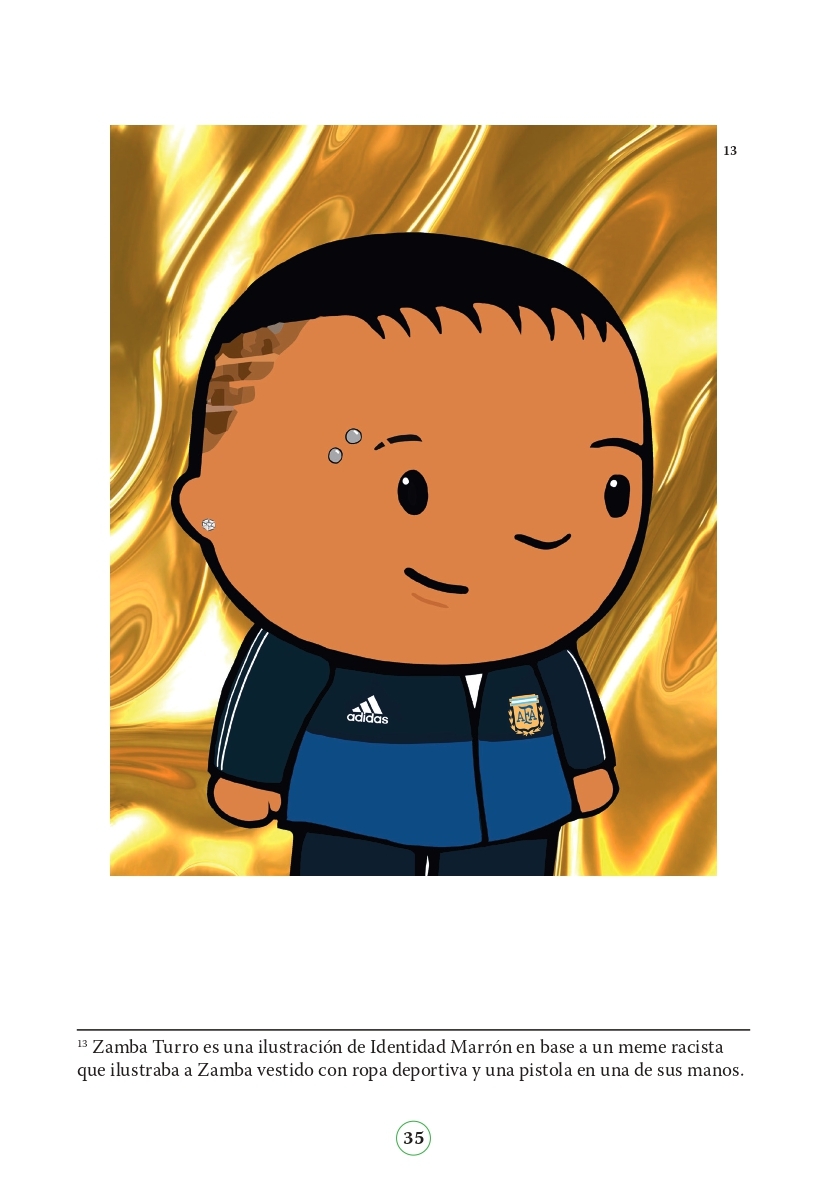 "Whitening operates in the collective unconscious that demands more and more from the masses to be able to be on equal terms with an advertising capitalist market that constantly demands social whitening." (page 34) “In Argentine cinema, for example, there is colourism in the way in which roles are assigned to the actors. Often actors who have a Marrón or indigenous phenotype are cast to play secondary roles” (Page 36). “Lohana, Diana and Daniela have something in common: they are racialised transvestites who have opened up the discussion about the racialisation of the transvestite-trans identity – an often invisibilised fact that we must make it visible so rights can be demanded” (page 44). 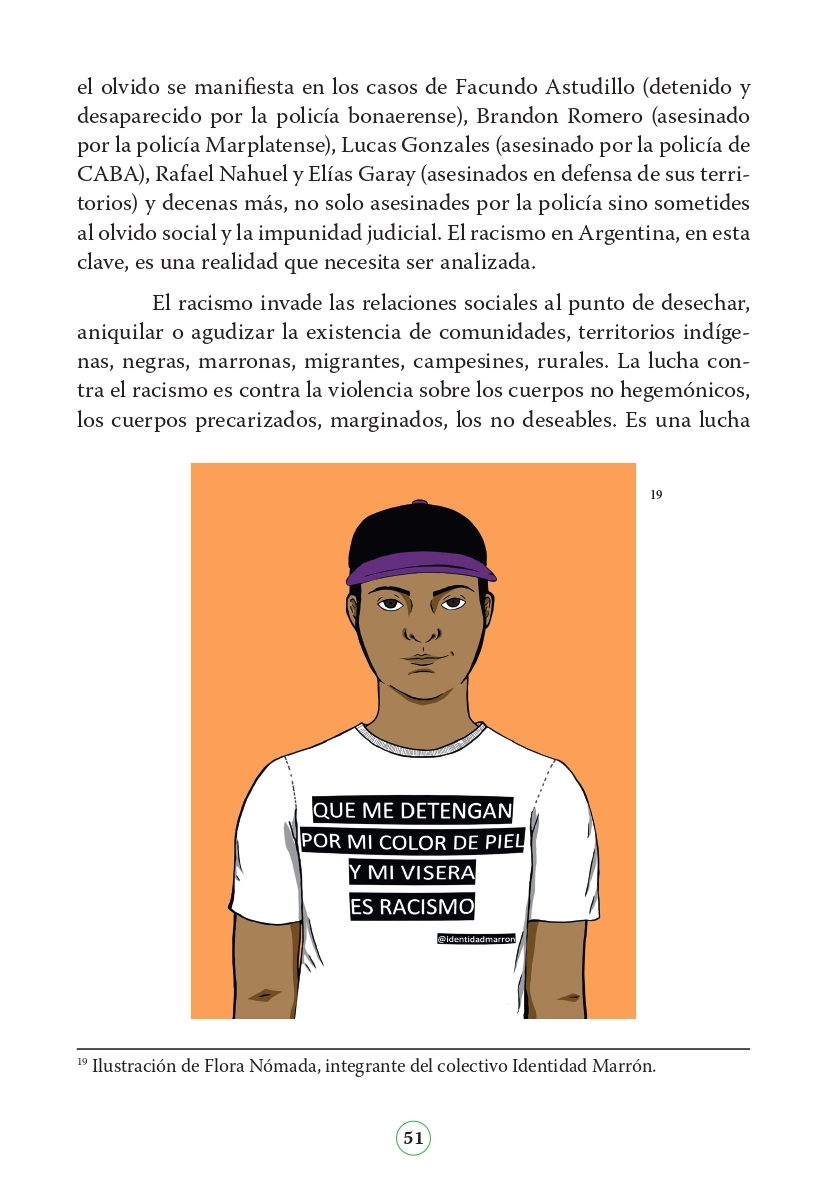 “To denounce trigger-happy occurrences in Argentina as racist crimes is the first step towards addressing that police and institutional violence is exercised against non-white bodies.” (page 52). 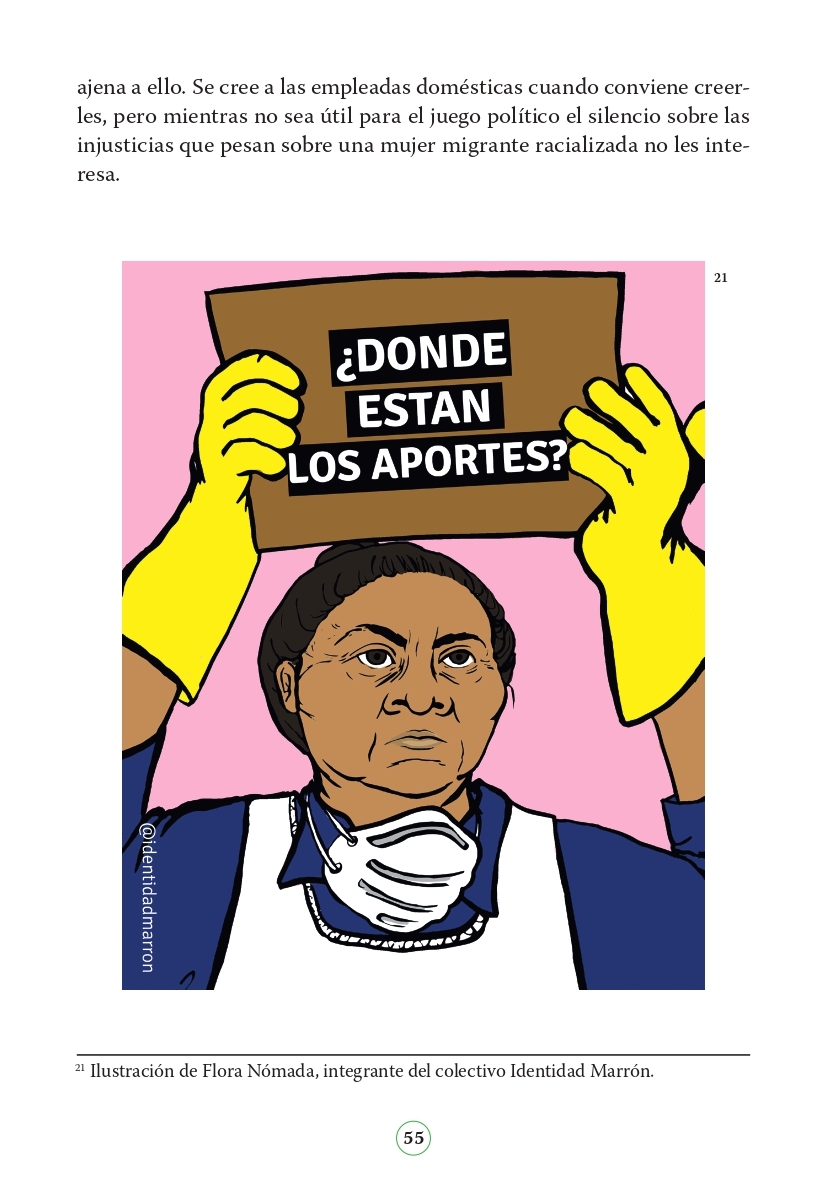 “We ask ourselves: where are the social security contributions? Where are the unpaid contributions that racialised people should have received? Domestic work is a feminised job. According to the state, 76.8% of domestic cleaners in Argentina are employed in precarious condition.” (Page 54). From many places and none
“He says that he would have liked to study
But with hunger and heat, you can't think
He longs for his little adobe house and the cot where he grew up” (Page 88) . From many places and none
“He says that he would have liked to study
But with hunger and heat, you can't think
He longs for his little adobe house and the cot where he grew up” (Page 88) .

Link to the full text of the selections in Spanish