Pedro Blas Julio Romero is a poet, writer, journalist and activist from Cartagena. He lives in Getsemaní (also called Gimaní), a neighbourhood emblematic of social struggles, which he describes as a "solemn disorder daubed with liveliness." His works are a creative critique of the social order. His work affirms individual freedoms and is populated with references to working-class worlds and to Afro-Yoruba religiosity.

His writing deploys an African and Amerindian framework that recognises memories of resistance in the microcosm of Getsemaní, drawing parallels between this neighbourhood of Cartagena and the American continent. He denounces racism by focusing on the gentrification of working-class spaces and the contempt of local elites for the Black heritage that has shaped the identities of the working-class sectors that he brings to life, as he does for Getsemaní. A fine example of this is the poem reproduced below, “Muchacha de las aguas, Gimaní” (in English translation).

Girl of the waters, Gimaní

did not manage to make itself into a saint

The black mamba serpent was sleeping beneath its feet

which beneath the ground urge on the great festivity

of this hidden neighbourhood

The very same island that once had an owner

where here it has time because the night is rough.

war-like with aprons for a cabin

boiling up ice-cubes of tasty beer

Her shop with the wine of eclipses she sold.

with which she married at her whim,

trailing behind her veil

guides from her bed.

Because she lived a blessed life

beneath the harsh praying

of siren grandmothers in the “purgative Cascara Sagrada” [3]

after the clearing of smoke at dawn

grey mist that wreathes around the silence

like a black dawn that does not appear in almanacs

Mask of a tangled life!

From all this comes her shiny complexion

Let’s guess how much bandumbeo [4]

did she not dance

in the late afternoon her beautiful teeth

and what she did not dance

at the great water pond of the water-well protests

Getsemaní hill to the soft luxury of Bacchus

Trembling of regretful rump, its slopes of love and shawls

her frolicking with eruptions of drumming

Or Gimaní Island that once had an owner

neighbourhood like tender Alexandria in the big entertaining stone

From Getsemaní to the cry of Musanga [5]

with Niña Gloria Hoyos of the drum

In the dark, she plants her moist palm tree

amid the weary dew

Banner of a thousand cries,

delta sunset of my soul

There was no Caribbean Sea to cow her

and deserting her navel

she copulated with the meridians!

the swimming of her hair up my scandal shirt

until we all took her

accompanied by the hard blood of drums,

her waist and silks

Finally she came back

pouring forth a crouching dance

and the claim of her drums upon sleep.

The poem “Muchacha de las aguas, Gimaní” (girl of the water, Gimaní) creates a poetic space with a colourful atmosphere that mixes overt and hidden elements of Afro and Amerindian religiosity. When portraying the daily routines of the neighbourhood, the lyrical voice mentions emblematic neighbourhood locations such as "Plaza de la Trinidad", the "Pozo", the shop with "tasty beer", adding references to "Musanga" (an African ritual specialist), "the black mamba", making "the sign of the cross” after “cleansing with smoke at dawn”, elements that refer to the mixture of Afro-Cuban religiosities and their black brotherhoods, known as Abakuá or Ñáñigo, and elements of Amerindian religiosity.

The poem combines all these elements in the figure of Gloria Hoyos de los Albercones, a mixed-race, audacious woman and neighbourhood religious practitioner, who grew up among "eruptions of drumming" and took up the smuggling of various products between Panama, Cuba and Cartagena. 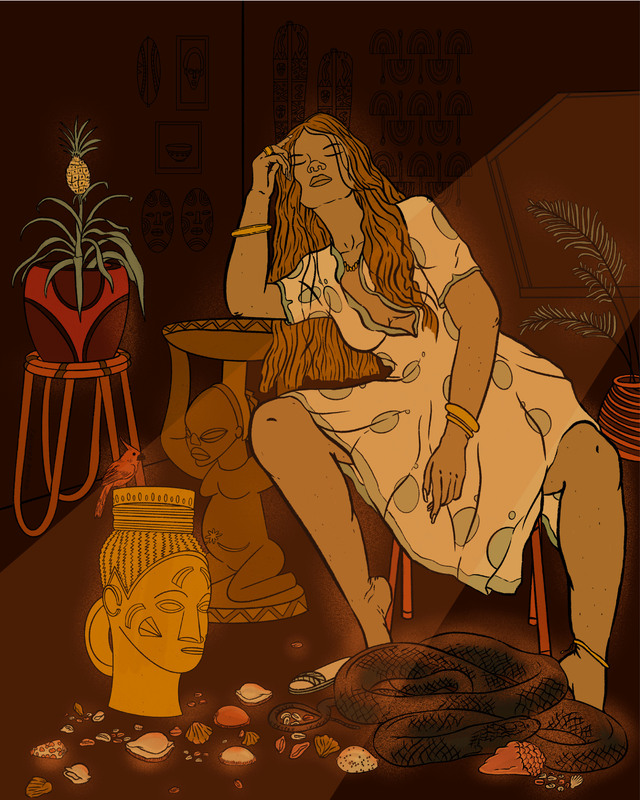 In the illustration accompanying this poem, created by Hanna Ramírez, a young mestizo woman can be seen, lying back on a chair, in a relaxed attitude. The strokes of the drawing accentuate the facial features and hair that highlight Afro aesthetics. The image makes symbolic reference to the poem by depicting a black mamba, sea shells and pitchers of water. These elements are associated with the working-class Afro expressions that characterise Getsemaní.

The anti-racist perspective of the poem and its author is glimpsed in the insistence on using poetic language to reconstruct the forms of religiosity and ways of life of iconic everyday characters of a working-class area. It seeks to reaffirm the differences that have been excluded in a racialized way. The poem is an ode to the resistance and permanence of Afro and Amerindian identities in the formation of working-class spaces in the city.

Ramírez’s image of the woman can be interpreted as a visual metaphor: the woman-neighbourhood/the neighbourhood-woman. The illustration highlights the role of women in the maintenance and reproduction of the social and material life of the neighbourhood. This female role is one of the most emblematic identity markers of Afro-descendant spaces in Colombia.