Tokugawa Japan was an urban society.

In the 1600s, the population of cities grew, their areas expanded, and a vibrant urban culture developed. Chōnin (city dwellers) were among the best clients for publishing houses and city maps and city landscape prints became popular.

Edo was an especially common subject, in light of its role as the Tokugawa capital and of its exceptional growth, but other cities such as Kyoto and Osaka were also frequently represented. 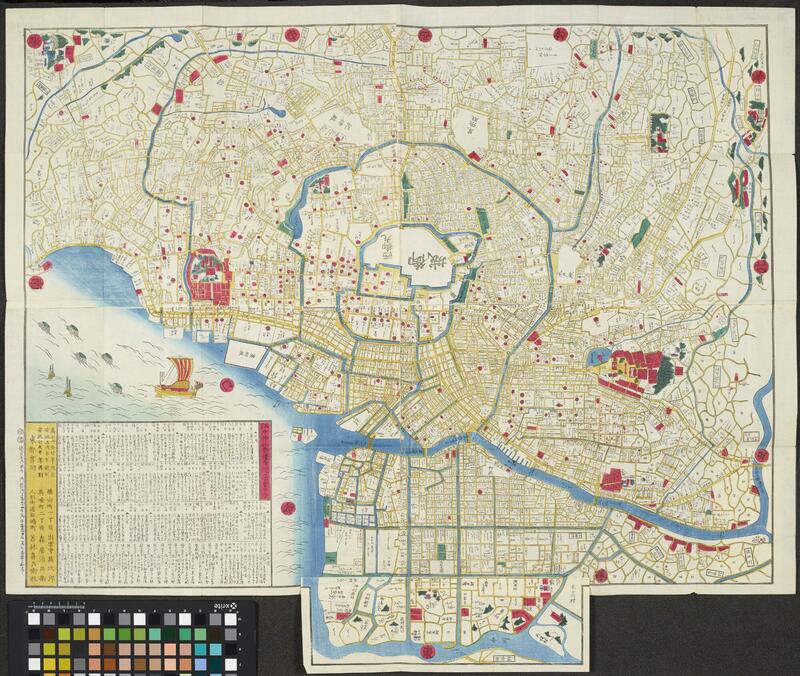 Edo (now Tokyo), the seat of the Tokugawa government, had over one million inhabitants. This map depicts the whole city area in great detail, with a drop-down section used to represent the newly developed eastern section.

It follows a structural tradition well established since the 1600s, giving a central position to Edo castle and its compounds and to warrior mansions, marked by family crests. It also represents governmental offices, commoners’ blocks, roads, major bridges, temples and shrines, lakes, ponds and rivers. Its iconographical complexity reflects the bustling life of the city. 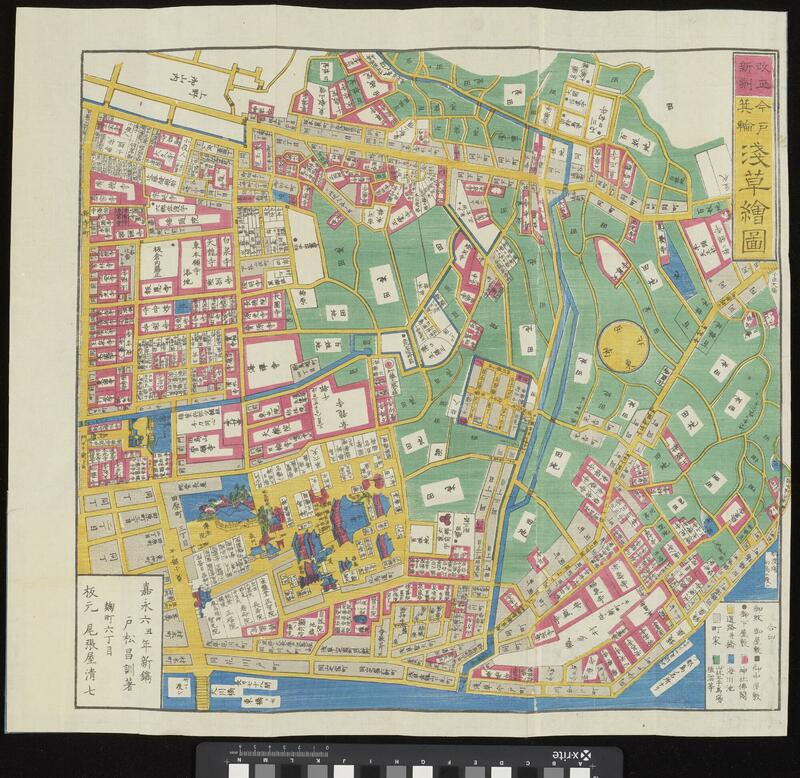 By the late Tokugawa period maps of Edo had become commonplace. As single-sheet maps hardly did justice to the varied life of the Tokugawa capital, new, sectional, and detailed maps of the city became popular. This series by the publisher Owariya was one of the best-sellers.

Sectional maps gave an equal spotlight to governmental, commercial, religious and recreational areas. They reflected the growth of the Edo metropolis and how commoners, such as wealthy merchants, had gained relevance, creating new trends with their culture and lifestyle. This specific map showed Asakusa, the entertainment district. 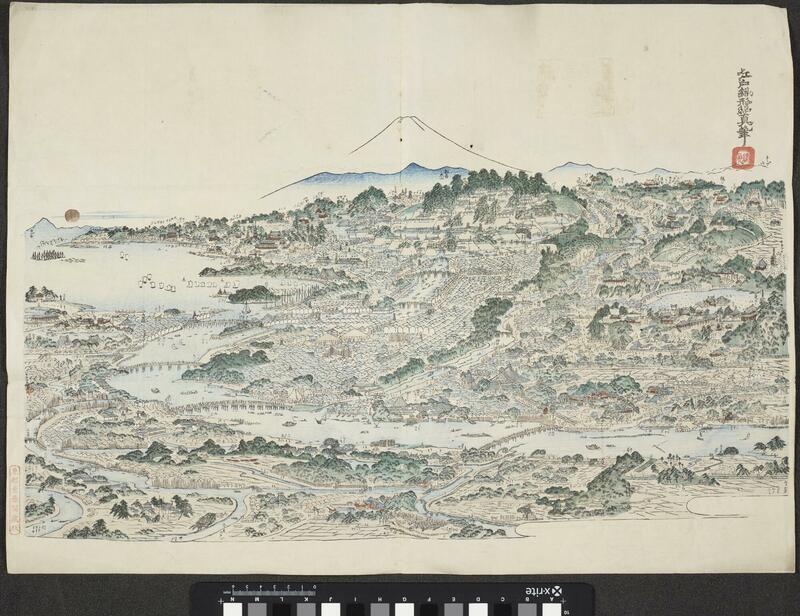 Illustration of the famous places of Edo

This pictorial map shows a bird’s-eye view of the city of Edo, as seen from the direction of Honjo, in present-day Sumida Ward. Drawn in single-point perspective, it fits the entire city on a single page, with a wealth of visual information about noteworthy sites. It highlights the nature of Edo as a city of water and greenery that made ingenious use of its river and ocean resources. 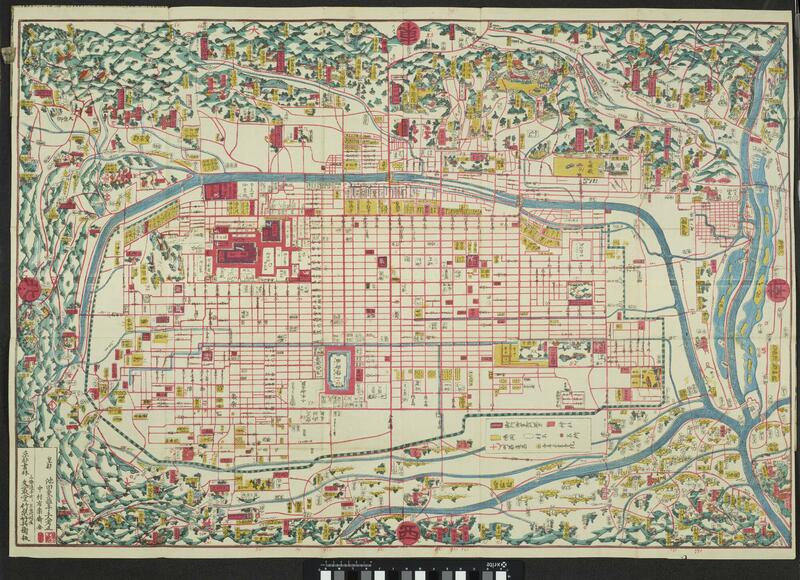 This map represents the Imperial Capital of Japan, Kyoto. In the Tokugawa period, the Imperial family had lost all of its political power, and maintained only a symbolic role. However, Kyoto remained a strong cultural competitor to Edo. It was also a popular tourist destination, thanks to the refined aura of the Court and to its many beautiful temples, shrines and historical sites.

This map, as was typical of Kyoto cartography since the late 1600s, covers both the central area of the city and its surrounding hills, where many of the points of attraction of the city were located. 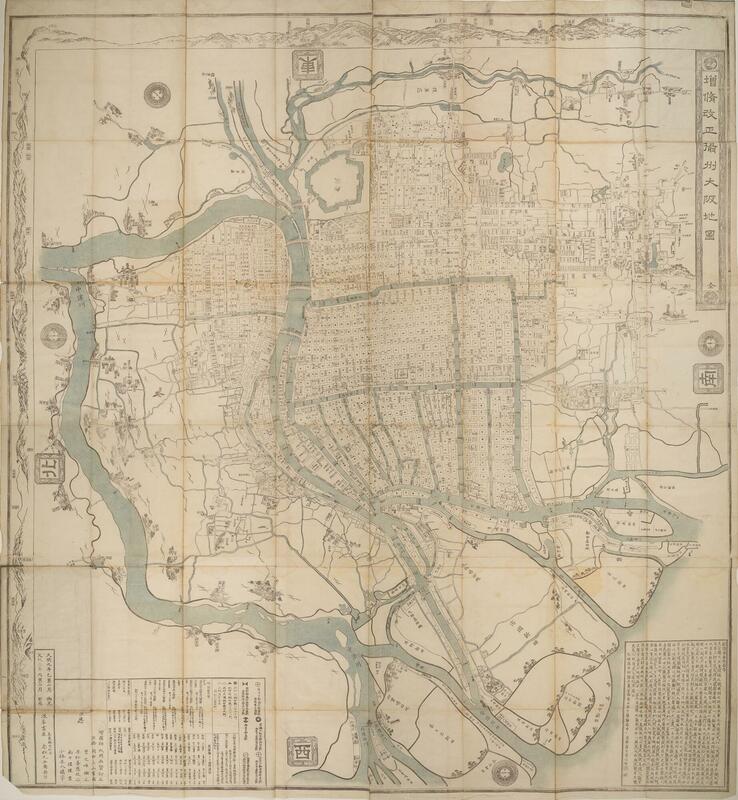 In the Tokugawa period, Osaka developed into a national hub for commerce, shipping and finance. At the end of the 1500s, buildings were mostly concentrated around the castle, but in the 1600s the city rapidly expanded, growing into a metropolis of roughly 400,000 inhabitants.

Daimyō (military lords) built their financial offices (kurayashiki) there, and used them to deposit the rice they collected through taxes, so that it could be changed into cash by Osaka merchants. New commercial peripheries were created in cleared ‘new lands’, where merchants and shipping companies made use of the city's canal network.

Showing the city at this mature stage of development, his map is one of the largest and most detailed commercial cartographical representations of Osaka from the Tokugawa period.