Identidad Marrón: Actors and the Dramaturgy

What kind of invitations do our families, fathers, mothers, grandfathers, and grandmothers receive from museums? What do museums in Latin America commemorate and what is the relationship with our corporalities and our ancestry? The person who observes the performances in the museum represents the Marrón bodies that dare to enter a space that seems not designed to receive them and that systematically rejected non-white people in the past. Crossing the glass doors is a political act. The youthful look of the actor establishes an intergenerational conversation because of those who were not allowed in before her.

Euge Choque is an interdisciplinary artist 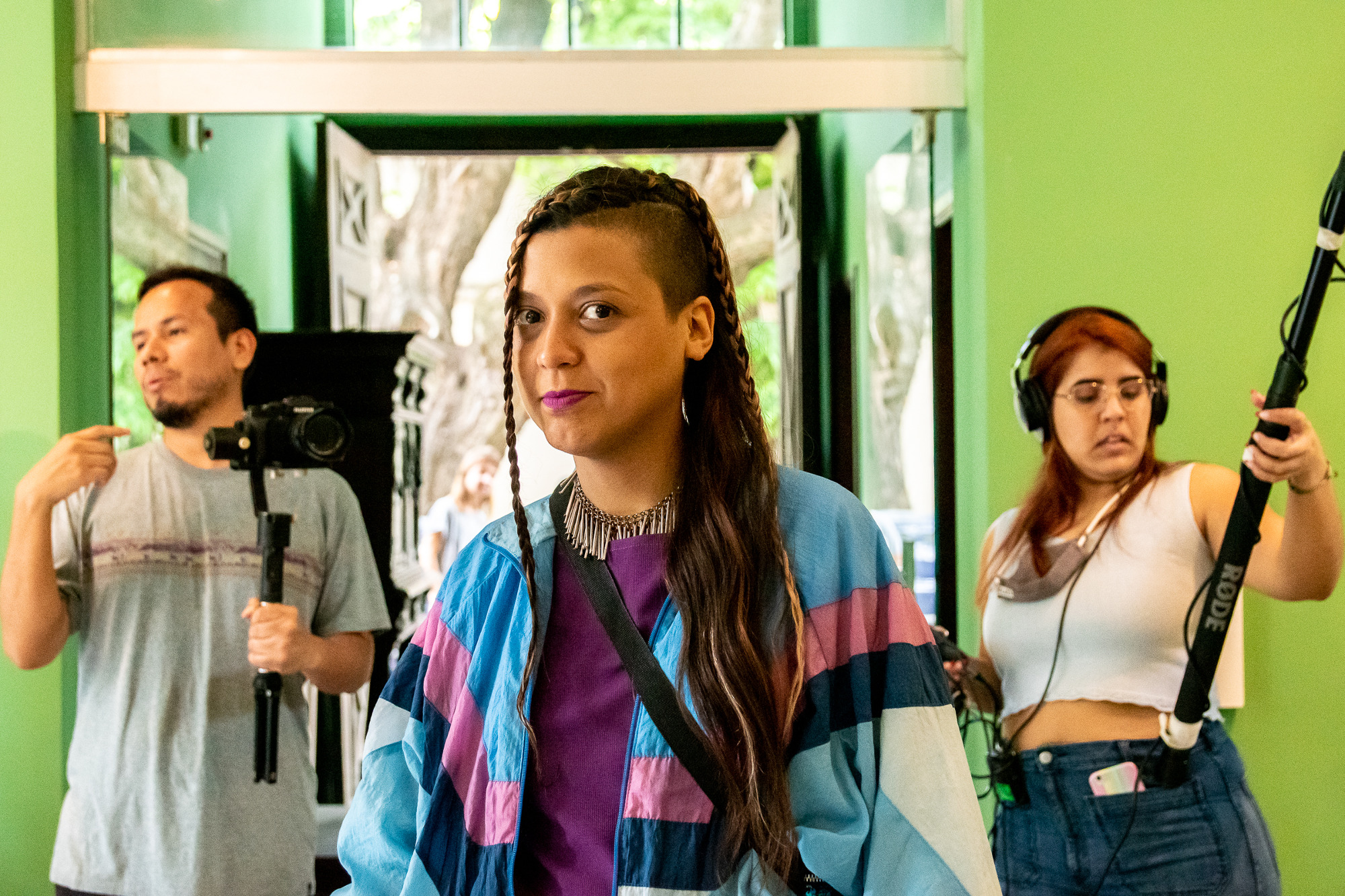 Image of Euge Choque during shooting

Daniela Ruiz, the Unwanted Queen, by herself

My name is Daniela Ruiz. I am an actor, the director of the company "7 colours diversity", and I also collaborate with the Identidad Marrón group. We presented “La reina no querida” to criticise structural racism. This performance was about class aspirations and what is achievable and what is not. Can a Marrón/Indigenous person be in political office? Can a Marrón/Indigenous person be president of the nation? Can an Indigenous person have money and think there are no barriers in our society?  Being a racialised Indigenous transvestite from Salta, it seemed very important to me to emphasise this structural racism. 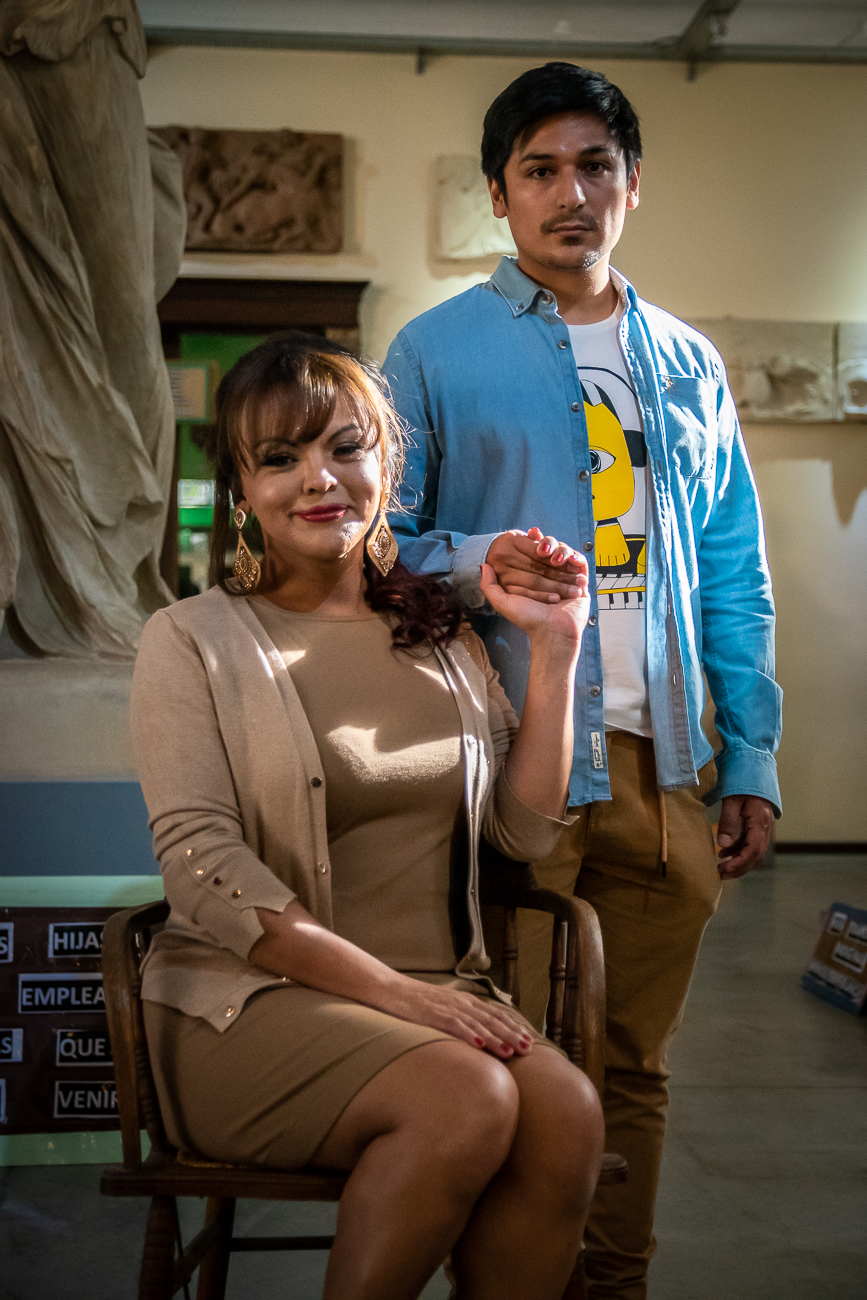 Image of Daniela Ruiz and David Angel Gudiño the day of the first performance.

There is always a base or a starting point for things. My monologue Marrón is where I reflect on my childhood, profession, and justice claims. From this text others emerged: Mi cuerpo Marrón (My Marrón Body), El David Marrón (The Marrón David) and Un Marrón en el Cervantes (A Marrón Person in the National Theatre). They constitute a collection of texts, photographs and performances called Marrón Series that seek to debate racism in Argentina. 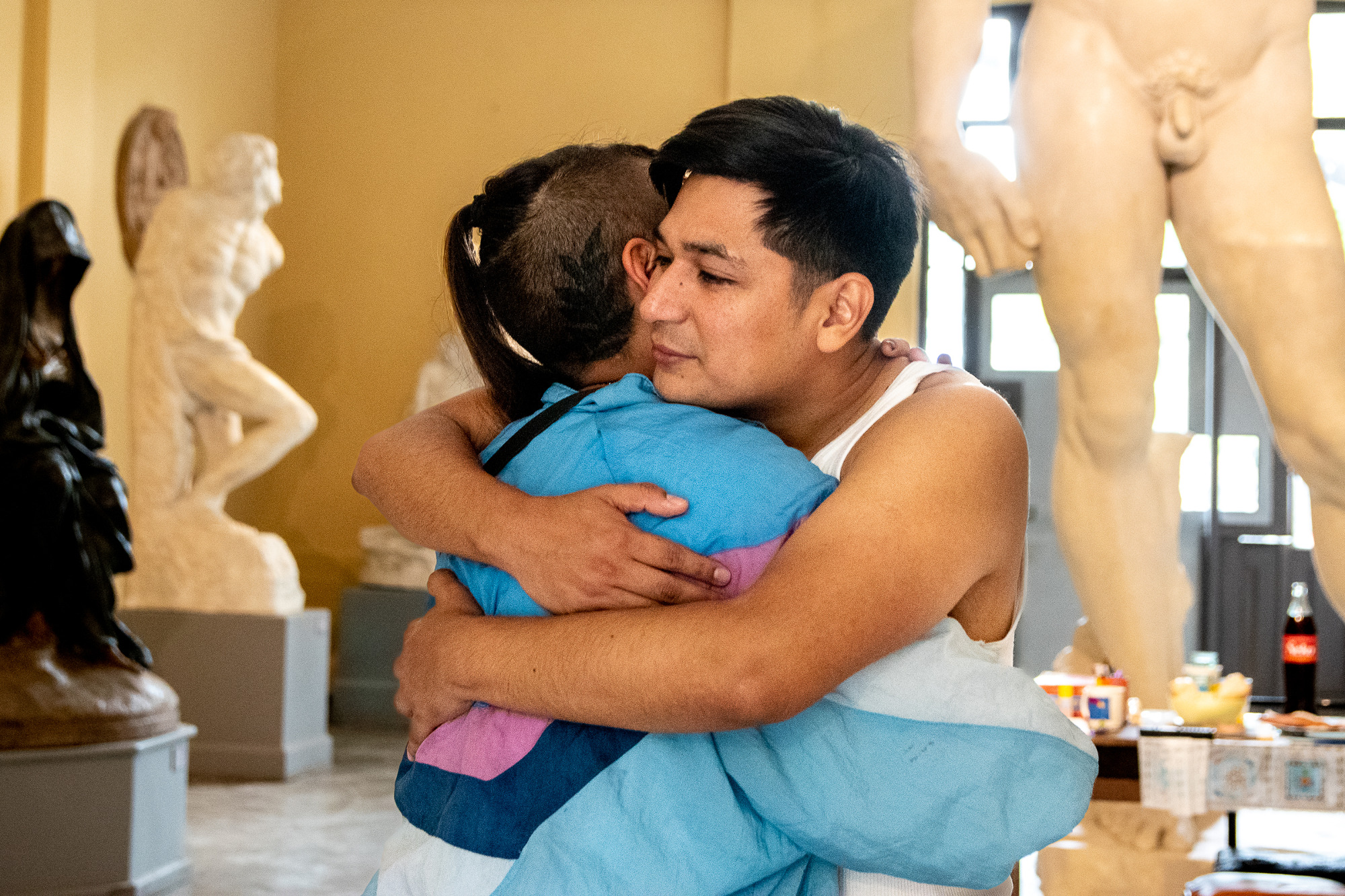 David Gudiño and Euge Choque during the shooting of the scene.

Rebe is not only an actor and writer: she is also one of the most viral images in Spanish-speaking anti-racism. Her defiant face and her iconic shirt that states #CallateBlanca (#ShutUpWhitey) make performative reading a living work of art. 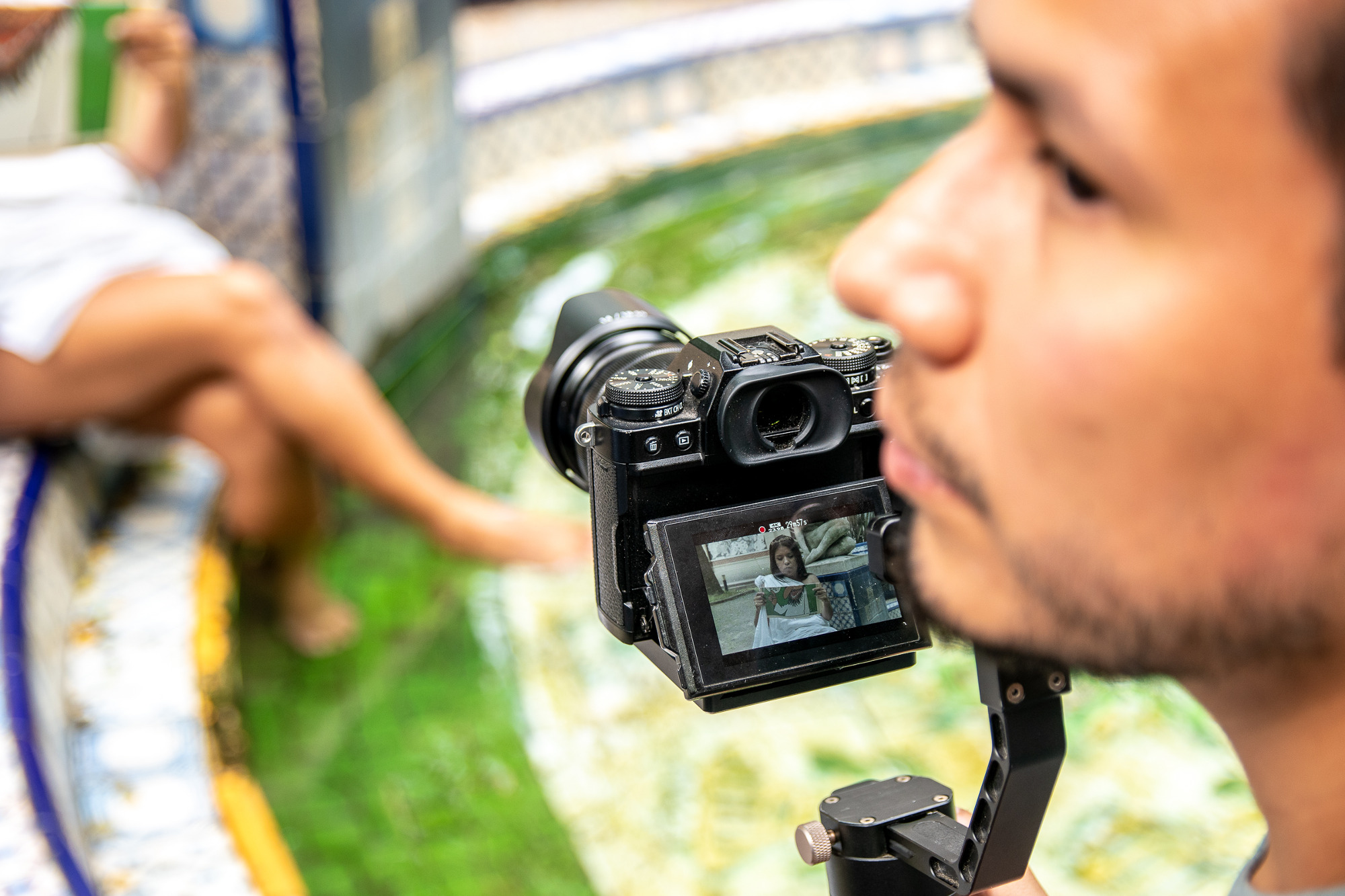 The performances were filmed by Dennis Guerrero and Libertad Subero and photographed by Adehmar Miranda - all members of the IM collective. This was not accidental. That Marrón gazes on Marrón bodies guided the cameras was a way to assert our right to self-representation. The Marrón cameras challenge the intrusiveness of the white, middle-class camera, guided by an exoticising gaze that objectifies and appropriates non-white bodies. 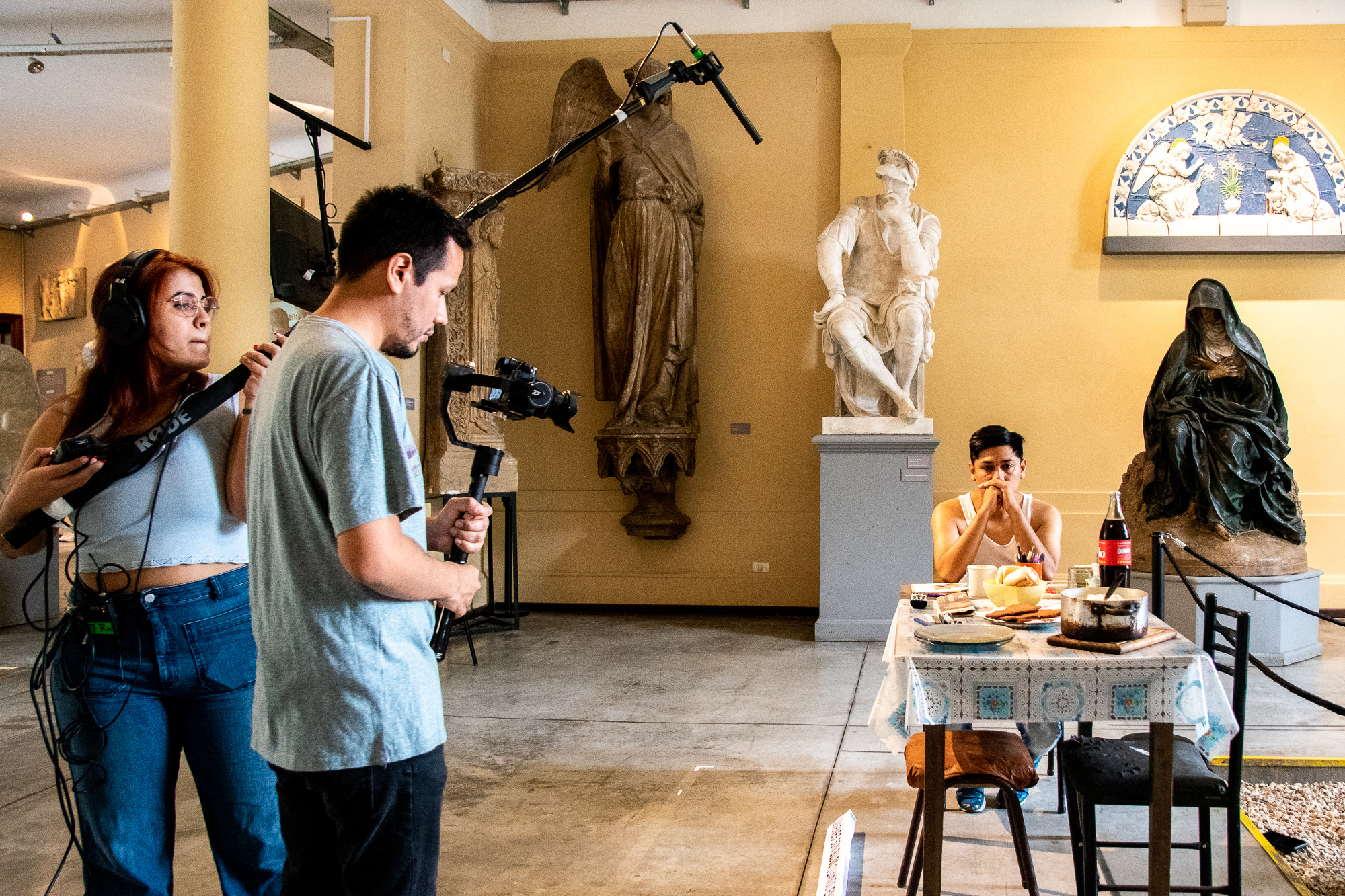 Libertad Subero and Denis Guerrero wait for David to be ready to record his monologue.
Prev Next